In a review of Bruce High Quality Foundation’s Empire in 2009, Maxwell Heller wrote that the exhibition had tackled issues such as “cultural poverty, urban sterility, and the dawn of the post-American era” with the usual stamp of burlesque-ness one has come to expect from most BHQF works. Looking at Pizzatopia in the Come Together: Surviving Sandy exhibition, one can understand what Heller meant when he called it a piece which “recalls Charles Simonds’ earth-tone sculptures of abandoned Lilliputian dwellings, but here the ghost town is our own city, cooked up and served.” 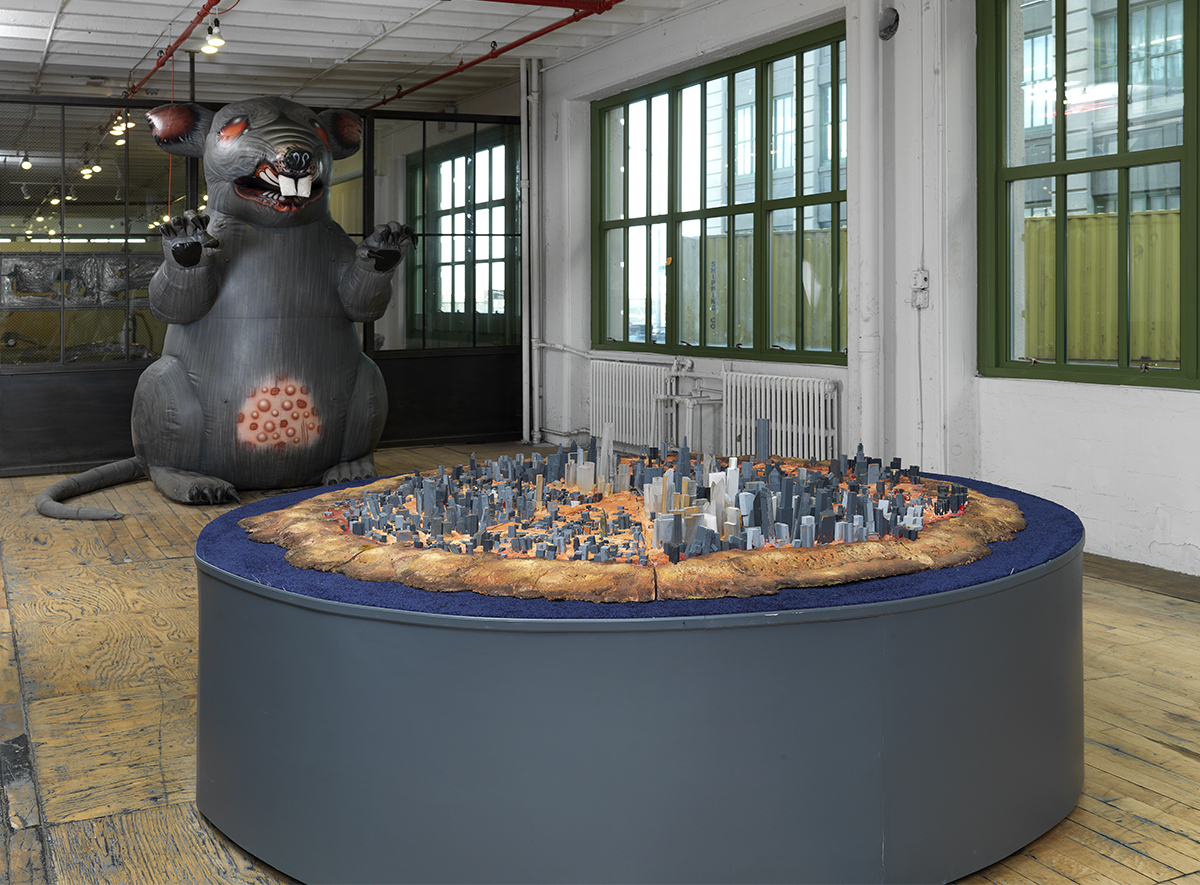 Not only is there a distinct visual similarity between BHQF’s Pizzatopia, which serves “Manhattan as a pizza topping, its streets flooded with cheese,” and the Liliput of Jonathan Swift’s Gulliver’s Travels, it would, in fact, not be outlandish to suggest that the institutional critique embedded within BHQF’s lampooning endeavors is somewhat in tandem with Swift’s didactic caricatures in the 1726 publication. While the literary work is a seemingly incongruous tale, regarding a man meeting others who are either substantially smaller or larger than him, Swift’s more satirical notions, addressing issues such as equality among men and the question of an individual’s worth to society, are subtly woven into the narrative. So too is Pizzatopia, with its cheese-flooded network of streets weaving through scaled-down blocks of Manhattan, a deceptively playful piece which, in essence, questions the very nature of New York City’s fabric. Manhattan as food (and therefore something that fundamentally pumps lifeblood into a system) versus Manhattan as the more frivolous “topping”: this seems to be the basic question behind the work, born of concerns regarding the city’s increasingly precarious socio-economic future.

Comparisons between Swift and BHQF lead to an interesting revelation: much about the way BHQF operates resembles the workings of the 18th-century Scriblerus Club (named for the fictitious Martinus Scriblerus) which allowed its members, like Swift and the irreverent Alexander Pope, the freedom to explore their pasquinades. The invention of Bruce High Quality granted a similar license to the artists working under the alias, and it is a license BHQF members used creatively in pairing Pizzatopia with two inflatable rat sculptures called Stay With Me, Baby for the Surviving Sandy exhibition. Flanked on either side by the proverbial scab-rats, the Manhattan-pizza faces a dual threat: that which is symbolic of opposition to unfair labor practices is also a reference to the vermin residing deep below the city’s infrastructure, slowly consuming it in bits and pieces, gradually weakening the increasingly shaky foundations of a seemingly dynamic city.