While the titles of Chris Martin’s “Red, Yellow, Green” #1 and #2 seem to be an acknowledgement of—or maybe homage to—Mark Rothko’s famous masterpieces, the paintings themselves resemble a combination of outsider art and Abstract Expressionism. Born in 1954 in Washington, D.C., Martin has also lived for long periods in the Catskills and has been identified as a “spiritual painter.” 1 His expressed interest in both genres, as well as the dichotomy of city and landscape, shows in his works: there is no question that he incorporates self-taught or naïve art (influenced by the fact that he worked for many years as an art therapist) as well as a refined formalism. 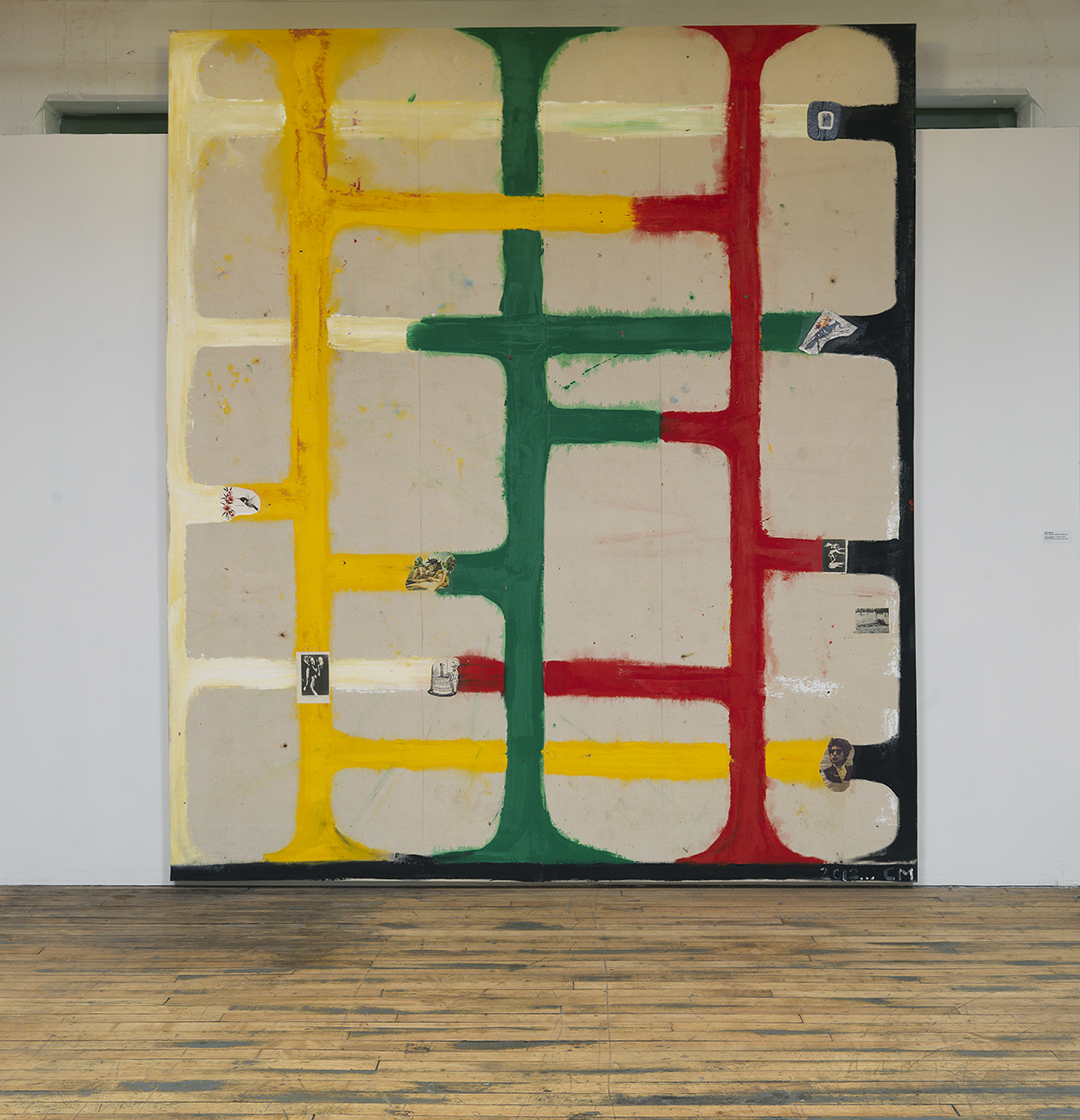 The Brooklyn-based artist who is represented by Anton Kern Gallery in New York City plays with size in an interesting way, given that his large-scale paintings (both 135 x 118 inches) incorporate details in the form of collage elements throughout the canvases. In painting #1 these minutiae gather mainly along the bottom, as if to represent the ground contrasting with their abstract lines, which might be interpreted as the symmetrical buildings of Manhattan. In that case, #2 could be the pre-scenario to the devastating storm, Sandy, with collage elements placed at different heights, a homogenous white background symbolizing the calm before the storm, and in #1, the moment of the impact: chaotic grays invoking the obscurity and disarray of the tempest, with people on the ground, in many cases having literally hit rock bottom. (The only details further up are all blue, the color of water and sky, the two elements of a storm).

Martin has stated that an interpretation connecting the paintings to Sandy is not intended, but that “implications and or associations that any of us may bring to them or derive from them are true,” as far as the symbolism of colors is concerned, and perhaps he would agree that this statement could be extended to other associations, especially the fact that he chose these two paintings for this specific exhibition.

Even though, according to Martin, the collage elements are “random stuff,” “I cannot tell why I used them,” it is striking that one of them depicts Bob Dylan, whose well-known song “Shelter from the Storm” comes to mind in the context of the exhibition.

In an interview in Hyperallergic, he stated that “New York City is an amazingly beautiful, lively, crazy place, and it was perhaps crazier when it was half-ruined. It is not just the street art, but the side of any bodega, and the way the weird photographs are slapped on top of each other. Now there is sticker art. I am influenced by all of that.” The way he incorporates his cutouts might well reflect how New York buildings are cluttered up with all kinds of photographs, posters, and stickers, as if the entire city were a collage, a vast artwork that was devastated in the same way certain artworks were destroyed during Sandy’s rampage.