Daniel Turner’s studio in Brooklyn lies alongside the Newtown creek, one of the nation’s most polluted bodies of water, and a new U.S. Superfund site when Turner moved there in 2010. He had been working mostly outdoors, in rural Virginia, before returning to New York for a studio residency downtown. As a reaction to the deadening and cramped environment, against the numbness induced by synthetic materials in modular space, he began to work on the space itself—rubbing the walls with steel, burrowing in the linoleum, and staining the sink with iodine and other elements—realizing an installation called PM, frottage that traces the erotic character of artistic labor and the creative economics of production. 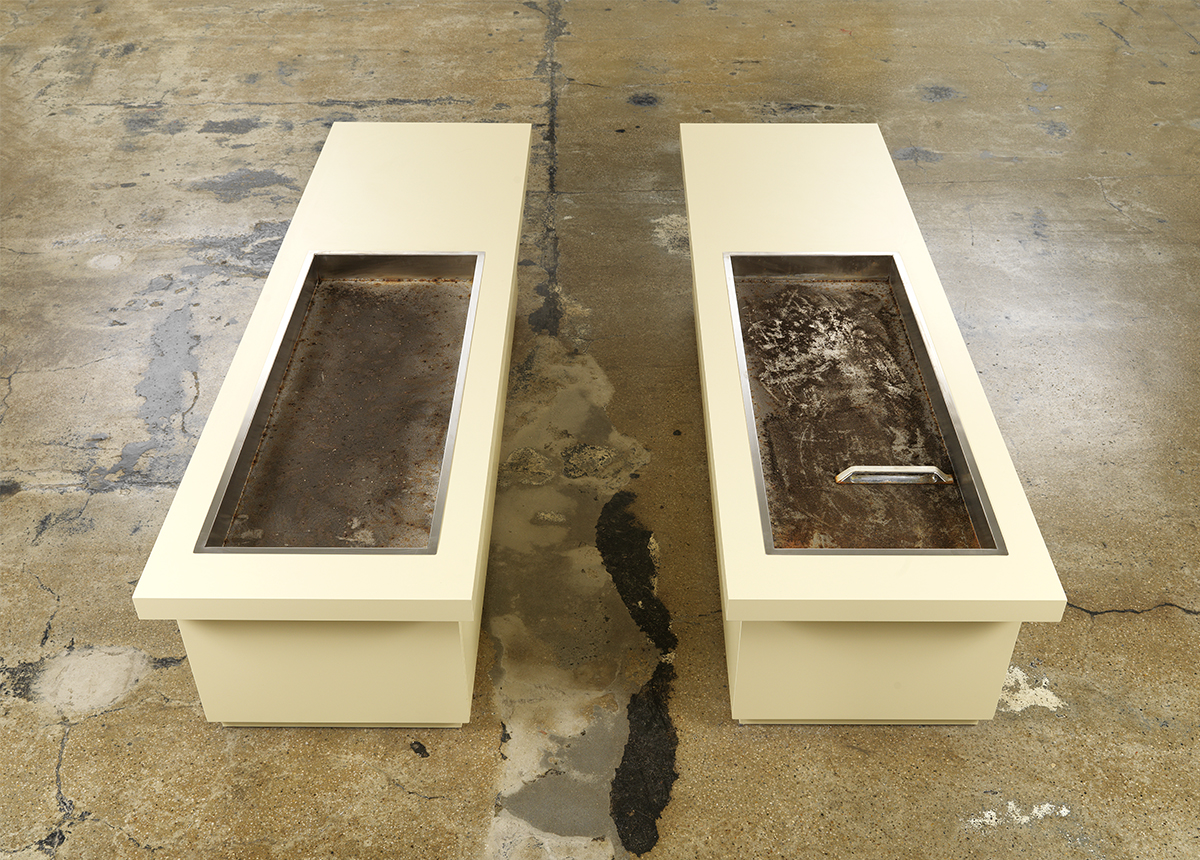 The primary body of work to emerge from PM is the more substantial relative of his rubbings—the object to which they betray a subject—treating an expanded visual (formal) and non-visual (psychological) field. It is a series of objects that fuse architectural, sculptural, and painterly elements to create environments of affective strangeness. These objects, tailored for the space they inhabit, resemble kitchen ensembles, but also washbasins in schools, doctors’ offices, laboratories, also empty cafeterias, agricultural feeders, basins for cleaning fish: all useful real world stations united by standardized industrial design, whose purpose is usually sterilization and washing away, the different application of which requires only a slight adjustment of scale. They are vessels in which something organic can be placed and disposed of, and all that will remain is the durable synthetic. Turner mines these cultural sites and processes to reclaim the generating engine of form from an industry that treats human and animal life and death with the same brutal expression. Turner’s installation scrambles our conditioned relation to these efficient objects, releasing their more abstract formal qualities, and drawing the very invisible line which separates human from animal nature.

In Untitled (2013), there are two roughly identical parts, placed symmetrically together, horizontal and low, no more than thigh-high, and nearly twice the length of a human body.  One walks around the pair, the doubling of which suggests something quantifiable, the beginnings of a larger process for which we are only the screen. The basins, occluded by a vertical perspective, are vessels for an identical process with different results, like twins, like an experiment. The basins contain water and soil samples from Newtown creek, collected ominously months before the event for which they would be installed. 1 The water has evaporated, leaving behind a richly visual black-and-rust residue that evokes the industrial and destruction-related work of Alberto Burri, Lucio Fontana, or Aldo Tambellini; and in process elaborates the horizontal automatism of Pollock, or of Warhol’s infamous Oxidation (piss) paintings, in which Turner grants contingency—here, Nature—an even greater power. The two parts function as a horizontal dyptich, in which the viewer is the third, synthesizing, relation. We are essential as both witness and subject, parodying our part in the industrial installations that these pieces resemble, but with uncertain purpose.

Untitled contains not a mere, static, representation of the disaster that has brought us here, but the living aftermath of it, the toxic residue, which continues to change subtly to this day, linking us directly to the event as it happened in real time, to trace the effects of time on the site of trauma.

In the context of the present exhibition, the vessels, in addition to their formal or abstract qualities, act as memorial vitrines for catastrophe, much as the war paintings of a Goya or a Géricault would have contained memorial representations of human violence and tragedy.  Untitled contains not a mere, static, representation of the disaster that has brought us here, but the living aftermath of it, the toxic residue, which continues to change subtly to this day, linking us directly to the event as it happened in real time, to trace the effects of time on the site of trauma.