Darren Jones exhibited four works hung side-by-side. Although they were made between 2012 and 2013 and are each composed of individual intentions, because of their proximity and significance they were, contextually speaking, separate, but acting as a collective and almost singular work. 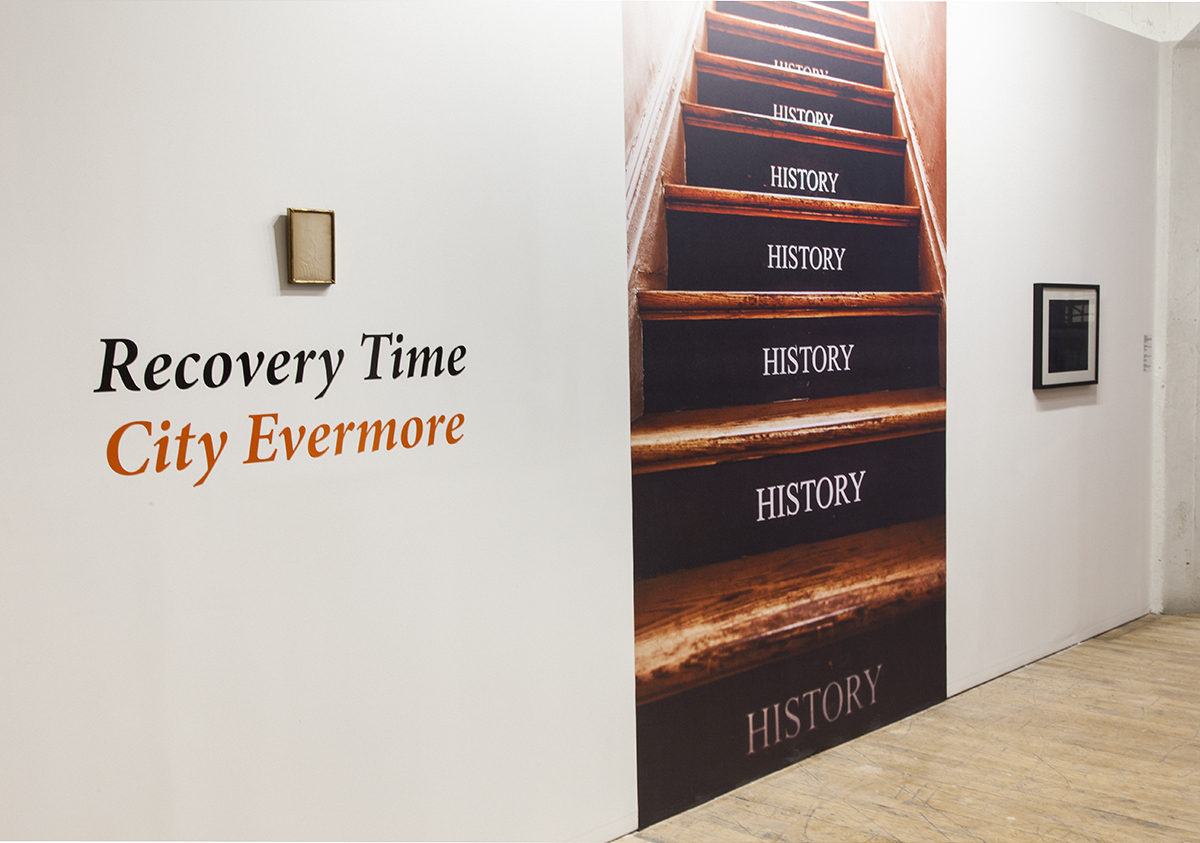 Hanging on the far left was Duct: a piece of brown paper with water marks at its base produced by, according to Jones, a liquid with the chemical composition of tears. It sits in a scuffed gold frame, perhaps found at a flea market or in a basement somewhere collecting dust. The tearstain is made-up of two uneven layers—one inside the other—and around the outer-edge is a dark perimeter, like a membrane, that formed while the liquid dried. It is an artifact of an occurrence that took place sometime in 2012, when the paper’s bottom was soaked in tears. Though the imprint, not unlike a memory, has only the slightest relationship to what actually occurred. The movement of before is over, and it has now begun another—a vanishing, a time-induced removal of itself.

Below this was Anagram: four words of vinyl lettering stuck directly to the gallery wall. In black it read “Recovery Time” and in orange, “City Evermore.” The text’s wall position and its context within the show seemed to suggest that the tears within the frame above were produced in response to the devastation New York City incurred when Hurricane Sandy struck. It is as if the gradual disappearance of the tears from the wrinkled brown paper is, like a clock, a documentation of a city’s emotional recovery time—a countdown to when all suffering will be removed.

To the right of these works was Interregnum (History Repeating): a large unframed photograph spanning the height of the wall, on which a stairwell is depicted with the word “HISTORY” inscribed on each step’s base. The stain and varnish on the treads of the wooden stairs are suggestive of a domestic setting and the thick coats of white paint on the walls, of a city apartment with blemishes covered up beneath the thrift of manifold layers. The image and its title undoubtedly refer to the common assertion that history repeats. But without memory—either personal or social—just as we could not acknowledge our body’s movement down a flight of stairs, it would likewise be impossible to witness a change in the present or a historical repetition.

If the past did not coexist with present, there would be no movement nor music, and certainly no mourning. The photograph does not sit in a frame; it is perfectly flat on the wall. It only appears to recede—the word “HISTORY” getting blurry, being halved, and disappearing towards the vanishing point—but, in fact, it goes nowhere at all. This symbol of how history affects the present moment, or memory our personal lives, makes concrete the artifice of nostalgia, suggestive of the way tradition perpetuates the future.

To the right of this was the small black-and-white framed photograph Wraith: Self Portrait as a Ghost (Fire Island Pines). While The Pines were less damaged by Hurricane Sandy than other parts of the island, they were not spared. Though this dim and grainy photograph is without signs of destruction, it is likewise without signs of life. Perhaps the photo was taken at night or artificially over-exposed, but like the tearstain it appears to be fading from sight, depicting both an emergence and a disappearance.

When we reminisce, this coincides with a breaking away. That is to say, when something vanishes, something new always comes into view; when something emerges, something always disappears. The roots from which tradition sprung are rarely considered at present, instead some vague semblance of it is perpetuated and played out like nostalgia. Perhaps history repeats at the point when the original occurrence is almost entirely removed—it emerges again to fill a space from which it was expunged. To rectify the artifice of nostalgia, both personal memories and collective histories, it immerges again to give truth to the trick.