I Can See Right Through You

For Surviving Sandy, the young and ambitious artist Dean Levin presented I Can See Right Through You, his first mixed media installation to date. Known for his monochromatic and grid paintings, the artist has switched gears, so to speak, and made use of readymade objects seemingly in conversation with each other: two transparent television sets facing each other playing black-and-white static. The clear-case televisions are typically made for prison cells to deter inmates from concealing weapons and other contraband inside the casing. In this iteration, the artist positioned both televisions on the ground playing pre-recorded static that was later manipulated and played in a loop. The result is a recondite image dealing with the fakeness and transparency of media culture, perhaps ever more accentuated by the eponymous and accusatory phrase “I can see right through you,” suggesting that either the viewer or the artist himself is not fooled by the spectacle of today’s television media. The pre-recorded black-and-white static then stands as an allegory to the everyday noise of TV-sitcoms, or the seven-o’clock news. According to the artist, “I’ve always been intrigued by 1980’s television culture… I like this idea of these two televisions watching each other, and seeing through each other, revealing its fakeness.” 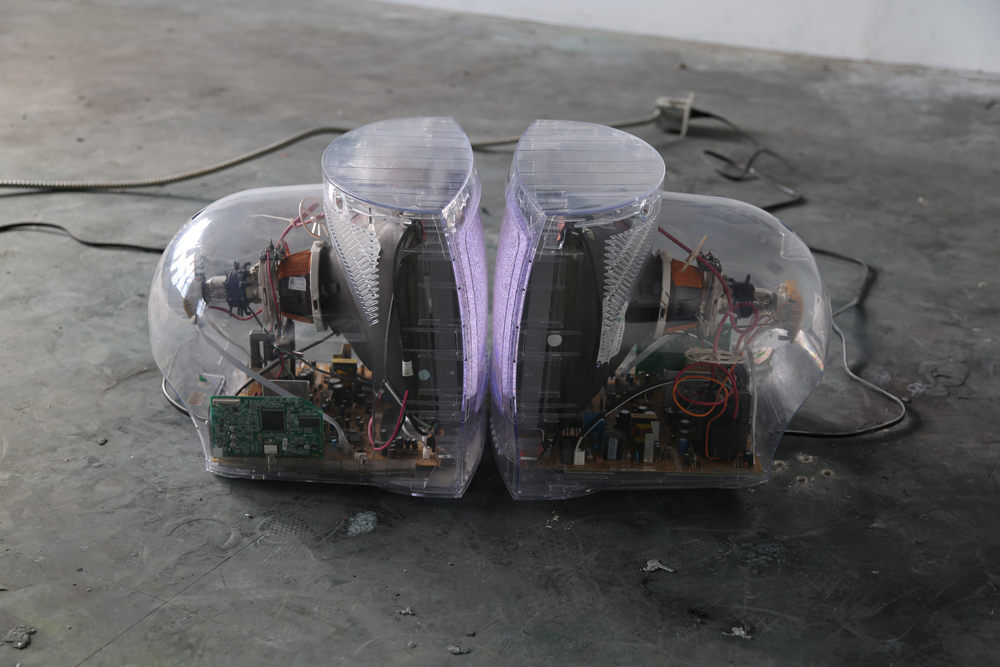 Dean Levin, “I Can See Right Through You,” 2013. Prison television and mixed media, dimensions variable. Photo courtesy of the artist.

Levin, who was trained in architecture at Pratt, has since moved on to become a minimalist painter concerned with space and perception. Paying homage to artists like Robert Ryman, and Agnes Martin, Levin’s work is also concerned with new technology, and the way it informs both artistic practice and contemporary culture. Utilizing Xerox transfers, and using unconventional ways of putting paint on canvas (e.g. laying the canvas on tiles with oil pigment and turpentine to create stained gridded patterns), Levin’s work becomes both illuminating and confounding in the most playful of ways.