Ellen Phelan’s Field Through Trees, is built up and wiped away—built up again, and blurred.

Purple, yellow, blue, the darkness of the tree trunks closest to us shows the strokes of paint as paint, and gives itself away even as it describes that which we are to look through. Past the trees there is a field lit by a golden sun or possibly it’s the boldness of the leaves themselves, their vibrant low branch masses indicated by a grouping of marks. Then again she wipes. Then again she indicates. There is a wind, a carrying of air, as she carries the paint with her movements, creating a film, undermining the satisfaction that could come from an eye landing on a clear form. 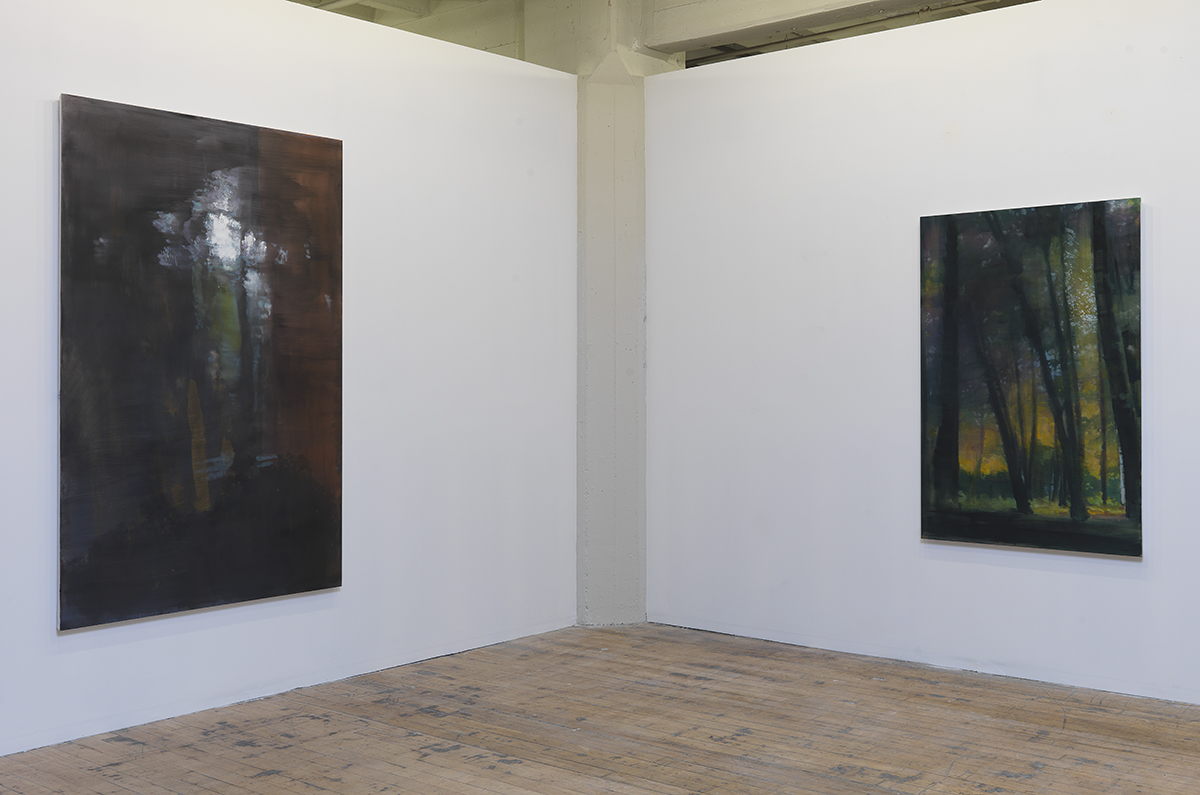 This is atmosphere in action and it shifts and sways with her intentions. This imbalance of green that describes the upper right and then is carried towards the left. Light hits the tree, becomes trunk, then becomes air, blurring and connecting the elements of the landscape, and through this engagement with the fuzzy indications, and their subsequent reaffirmations (the lightest part of the work in value is an area where Phelan has laid down highlights indicating dappled light through the canopy), we are reminded of ourselves as in the presence of an object, while at the same time affected by the depiction of the effects of this place.

In the 1970s, Ellen Phelan was making large freestanding fan pieces, where she essentially made paintings in space. It was possible to move amongst and around them. Bodily in size, Phelan created a sensually perceptible space to move through. It was around this time that she began to paint outdoors during the summers spent with her family in the Adirondacks’ Lake Champlain region. These plein air works began as small black and white gouaches, and by the late ’80s, Phelan was translating them into large oil on canvas paintings. She has continued to develop this work and continues still—her methods of making evolving with technology and concept. Phelan’s work has always engaged a variety of mediums, but the conceptual thread is strong throughout. An effectual sensation is created, an atmosphere of articulation.

In a phone conversation, Phelan described her academic training as something she was thankful for, and expressed that as an educator she has told students that sometimes it is necessary to know how to do something in order to know that you don’t need to do it—that you can “discard” it. Discarding, itself, however indicates a something to be discarded, and holds memory in this act as a presence in absence. This presence in absence is what is found in Field Through Trees, in her blurs, in her veil laid over and lifted, her indications of material, act, depiction and subject. Phelan has varied her material approach over the arc of her career, and has worked fluidly throughout, moving amongst her projects that evolve out of and inform each other. In this painting, it is possible to see this kind of practice taking metaphoric form, indicating in paint and object, presence in absence—the effect of discard and memory.