As the son of artist Rob Ryman and art critic Lucy Lippard, Ethan Ryman (New York, 1964) was exposed to visual art at a young age. However, like his father—who originally moved to New York to become a jazz saxophonist, only to become a painter instead—he first had a successful career in music as a producer. Then in 2007 Ethan began making visual art seriously and never looked back, generating his own style of abstract “photo-sculptural” artworks designed to complicate their viewers’ perception of the world around them. 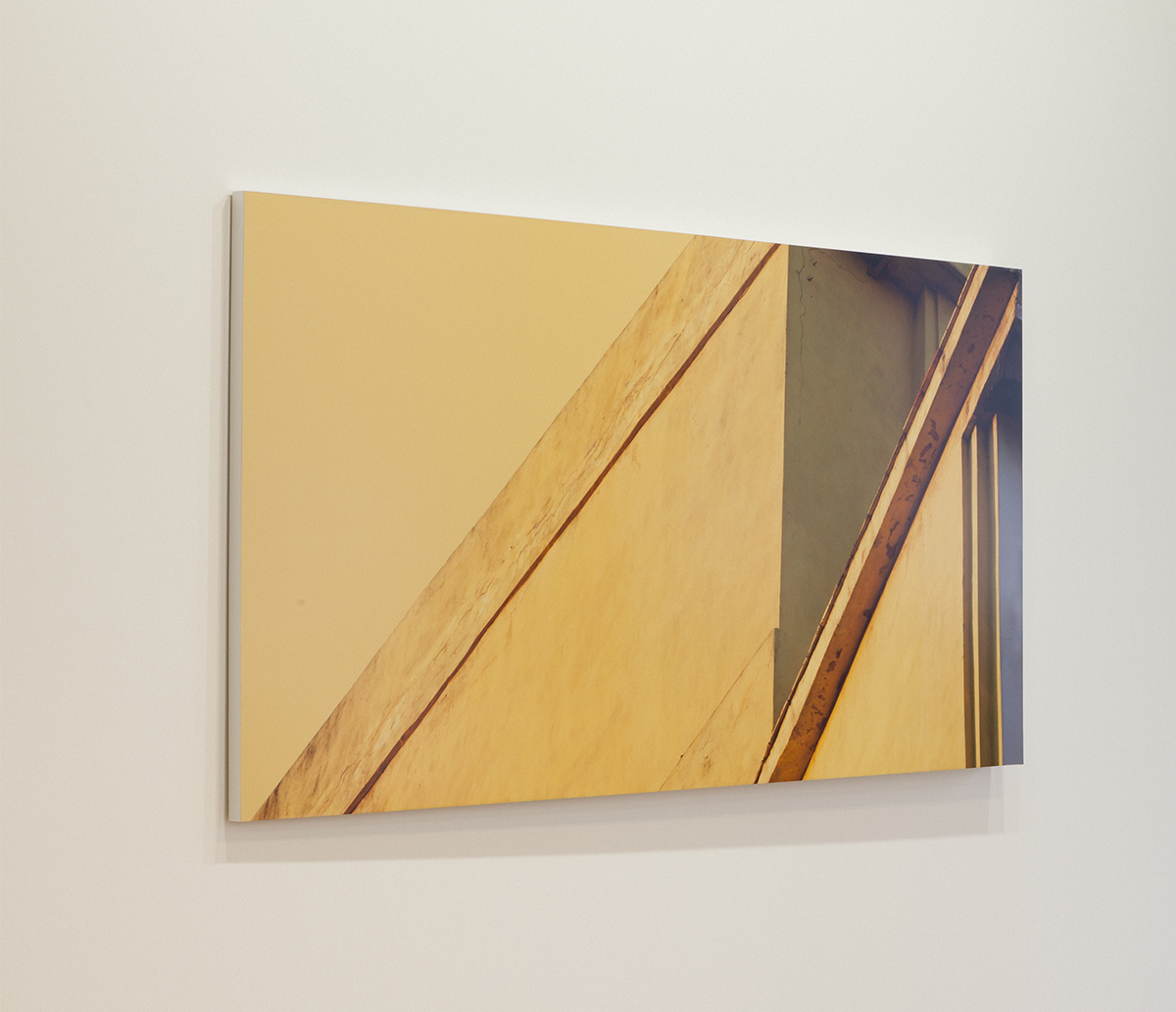 While Ethan Ryman uses digital photography in some of these works, he insists that he is not a photographer. Unconcerned with the documentary aspects of photography, he treats the camera as a tool for flattening light, space, and time to reveal the pre-existing abstract compositions that make up our lived environment. Inversely, his purely sculptural works employ light and shadow to create three-dimensional forms that can be read as flattened compositions. While Ryman makes both photographs and sculptures, it should be noted that he considers all of his work “photo-sculptural” in that the photographs (produced by light hitting a sensor) are experienced as embodied sculptural objects. The sculptures are also experienced as a light based phenomenon, produced by the action of photons bouncing off of the sculptures and hitting our eyes.

The two photographic works Untitled Convergence H24 and Untitled Convergence H17 (both 2013) feature architectural details that Ryman photographed in Trinidad and Havana, respectively. This information is incidental though, as Ryman has left all such clues out of the titles and cropped the images to reduce their constituent elements into two-dimensional abstract forms. The images were then printed on aluminum panels and mounted to protrude off the wall at a subtle angle to reemphasize their three-dimensional object-hood.

In his installation Flat Perfect Wall Construction #1 (2013) Ryman created 25 nearly identical sculptures and arranged them on a wall in a five by five square. Made of particleboard painted in white, each sculpture consists of a flat square with nine smaller squares protruding from it at a downward angle. While the repetition and the regularity of the white squares within squares initially evokes the idealized perfection of the mass produced commodity, closer inspection reveals that each unit is ever so slightly different from the next, belying its hand-made nature. Just as Flat Perfect Wall Construction #1 is not conventionally perfect—if perfection were to be equated with precise standardization—neither is it by any means flat in the standard definition of the word. The smaller white squares jutting from the surface of the bigger white squares inevitably cast shadows below, which are an integral component of the installation.

From any given angle, at any given time, through any set of eyes, Ethan Ryman’s artworks will present a different vision, and each one of those visions is an invitation from Ryman to the viewer to stop, squint, and see the world as the beautiful work of abstract art that it is.