The Battle at Goat Island 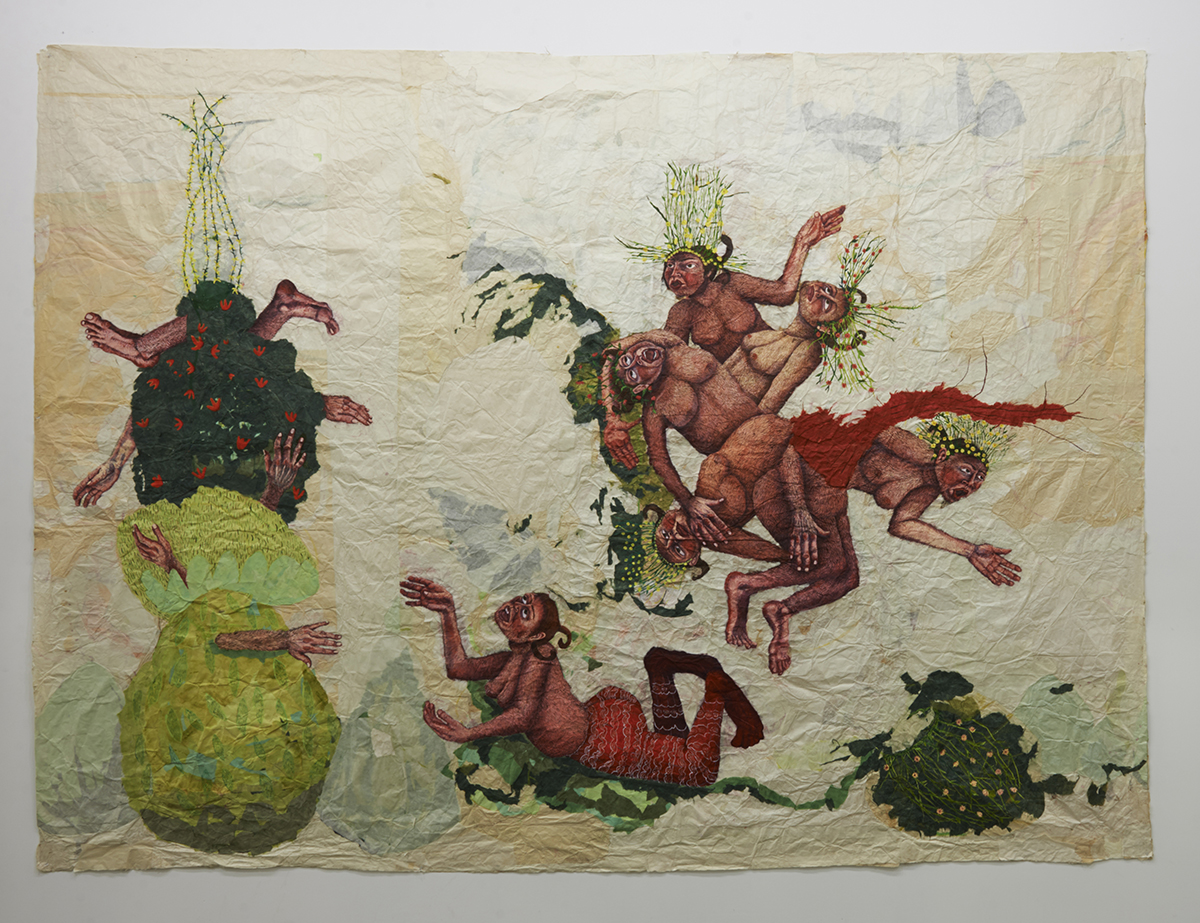 Jennifer Nuss, “The Battle at Goat Island,” 2004. Gouache and collage on paper, 89 x 89″. Courtesy of the artist. Photo by Zack Garlitos.

Elves? Sprites? Muscular fairies? Outcast female deities from a far off land? Naked and vulnerable with breasts exposed, they tumble through space like whirligigs set loose on a stormy day. One lies on the ground, back arched, beckoning to the various limbs that are sticking out of green bushes or maybe those are mutant fruits (pears?) that have somehow swallowed them whole. Whether due to a storm or the fall from some twisted paradise, these are indeed figures flaying about in distress. The chaotic yet storied effect is heightened by the delicate color and detail by which Nuss renders her fairytale characters and strange vegetation in wispy gouache on fine Japanese paper and cut collage. Fragility, panic, disaster—something of import has certainly set these bodies going. The wide open-mouthed expressions and loose awkward poses of the arms and legs akimbo, remind one of the astonished, terrified beings of Bosch or medieval manuscript marginalia. It could be a page ripped from a story book and in truth the artist says her work is inspired by the twelve volume collection of individually monochrome colored Gray Fairy Tale Books (1889 – 1910) collected by Scots poet, literary critic and novelist Andrew Lang and illustrated by the prolific late Victorian illustrator Henry J. Ford. And yet Nuss is also a reader of the astute, and terrifying, apocalyptic speculative fiction of Margaret Atwood’s MaddAdam Trilogy (Oryx and Crake [2003], The Year of the Flood [2006], and MaddAdam [2013]) which, when combined with the fact that this show was put on as a testament to our “surviving” Hurricane Sandy, can’t help but prod us to place ourselves right inside the force of this tempest.