Looking out to Sea III; Back and Forth; Coastal Touch

We were already blackened with charcoal that wouldn’t come out even with vigorous scrubbing after the first week of Gwen Strahle’s Drawing Marathon at RISD in 2005. It was a notorious Winter Session elective that locked students from every discipline at the School in the Foundation Studies drawing studios from 9 a.m. to 9 p.m. Monday to Friday; fifty hours of drawing per week, for two weeks straight. 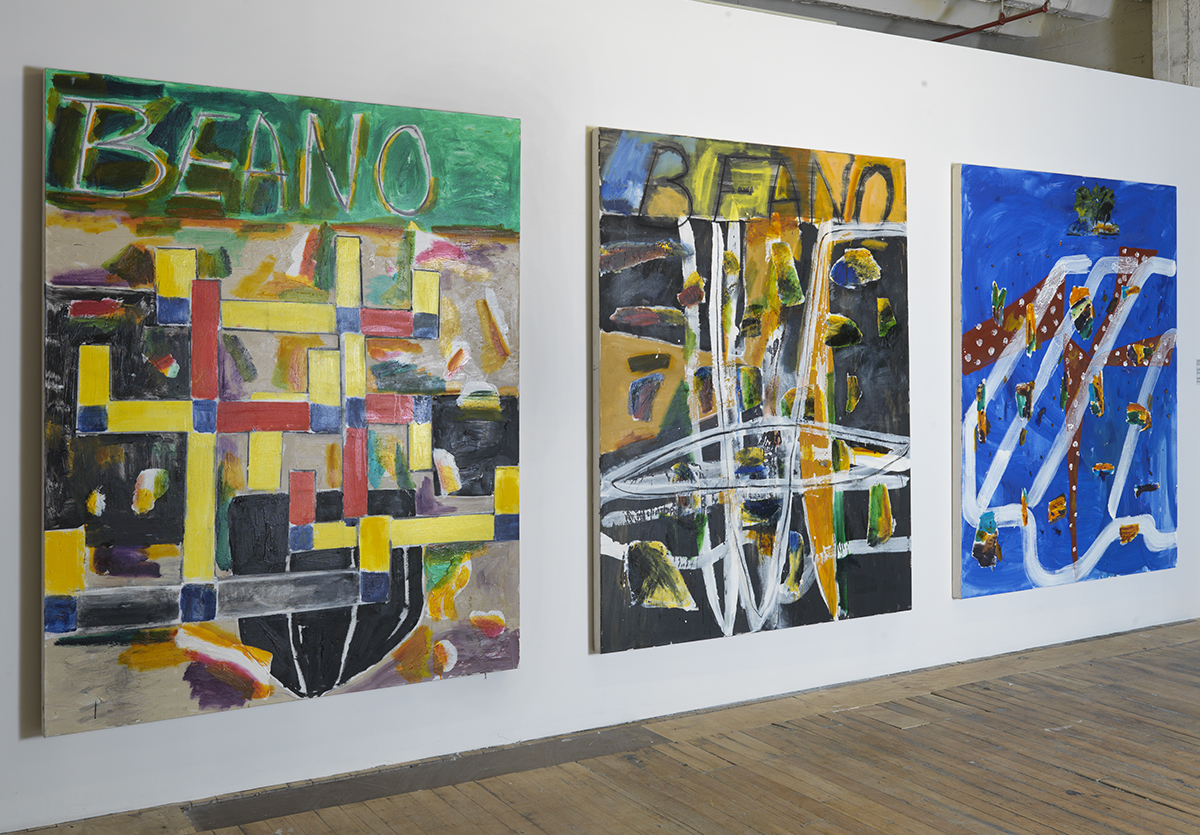 In the second week of the marathon, when we were all exhausted, John Walker arrived as the visiting artist. We really had no idea who Walker was, much less what his work looked like. We knew he was the head of the graduate painting program at Boston University—a program Strahle, and thus we, had enormous respect for. We didn’t know he had represented England at the Venice Biennial in 1972.

Walker invited us to paint from the immersive still-life environment, which surrounded us: nude models, curio from the nature lab, enormous plants, which were lovingly misted daily, and a provisional architecture of wood and cloth. We were told to use white gesso on five-by-seven-foot paper surfaces—white-on-white but as true to life as possible. He told us to think of John Constable as we worked, a painter Strahle had often used in her near-daily slide lectures, focusing on Constable’s pragmatism, his commitment to painting from direct observation, the economy of his mark-making, and the joy that radiated from his canvases.

Walker’s challenge was an intentionally impossible task. We worked for two hours—using the thickness of the paint to describe the environment around us until we were nearly going blind. He then quietly moved around the room, talking to us about painting from observation, and how it served as a one-to-one relationship for the problems of painting in general. He urged us to look more closely, to use the shadow created by the natural light streaming in from the skylights to “see” the white paint. He insisted that we should resist abstraction as much as possible, that the key to our drawings would be their adherence to what he called “the set-up.”

John Walker paints plein-air in Maine every summer. He brings his Boston University MFA painting students up there with him. He drags huge canvases out to a particular spot in the woods. He paints looking down from a ravine at a lake that comes and goes with the rain. The lake is often approximately the same shape—kind of two rectangles shoved together at an odd angle; it reappears in his paintings from that spot over and over again.

It’s nice to have a shape to hang your feelings on.

He said in his artist talk later, “It’s nice to have a shape to hang your feelings on.” While he is faithful to the set-up, in his case a vast landscape, the repetition of painting over and over forces him to focus on how he makes the painting, in other words, on brushwork, mark-making, the way the painting is constructed physically, its edges (which are always different), color, light, and space, all which charge the painting with emotion.

Toward the end of the workshop he started hauling around a black trash bag full of charcoal powder and spread a trowel full of charcoal dust across the surface of each student’s drawing with a twelve-inch-long, six-inch-wide paintbrush with steel bristles allowing the black soot to rain down across the wet acrylic. When the smoke cleared, every student’s drawing was suddenly in crisp focus because the charcoal dust had settled on each painted brushstroke, each impasto ridge. Our drawings were suddenly transformed from the white-on-white pseudo-abstractions to reveal the three-dimensional space of the drawing studio with its plants and animals, fabric and architecture, the skylights streaming sunlight down like a canopy.

This, we would later discover, related to the other end of the binary, which Walker identified: the naked human emotion of Goya. He described, falteringly, his experience at the same museum, the Prado, as a young man. He was so moved by the power of Goya’s paintings, hundreds of years after they had been made, despite virtually no direct relationship to Walker or his contemporary life, that he literally collapsed, and had to be taken out of the gallery in a wheel chair. There wasn’t a shred of irony in his story.

It is these two opposing poles, Goya versus Malevich, that create the binary line upon which Walker locates his painting practice: a distinct point between Malevich’s Suprematist square, a symbol of Modernist abstraction, and Goya’s raw emotive power, the power of painting that transcends history.

During his artist talk, it was visibly difficult for Walker to go through his old work in slides. The paintings still had a deep, emotional resonance with him, even in reproduction. Later, he told Strahle that this would be the last workshop of this type that he would ever do. It was Walker’s utter sincerity, the totemic scope of his project, and his dedication to a life lived in and for painting, that was so powerful for us as students.

He gave us an hour to resolve our drawings.