There is something on the move. It’s a total grey-out; a haze of billowing fog clears to reveal a shapeless form. The form appears to have two wispy arms, and at the end of each arm there are hands that gesture with charismatic force. The form is active and airy, and it weightlessly hums and drifts on the canvas like a jellyfish. Pushing out to the front of the form is an oblong, smoky face. A red, hollowed-out mouth playfully overcomes the face’s surface and the mouth is filled with a set of ten rotating disks for teeth. Do you want to know the craziest thing about the teeth? They double as eyes. 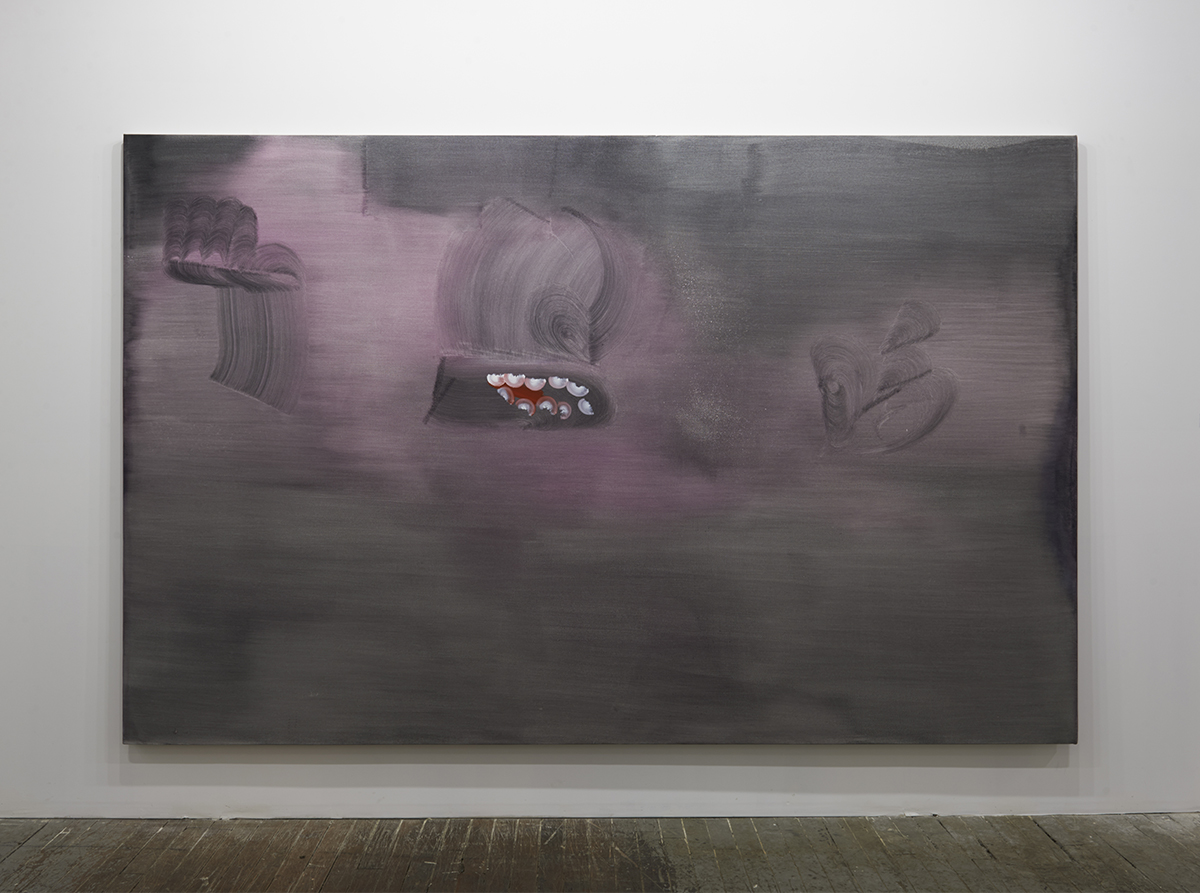 Mawinzhe (2013), Colombian born Juan Eduardo Gomez’s whimsical contribution to Surviving Sandy, is a reminder of painting’s potential for exuberance. The 84-by-132-inch oil painting is fleshy and animated, and Gomez’s brush strokes are at once vigorous and carefully placed; the long smooth marks are self-assured and transformative. There is a tension present in the work; it feels like the subject is at odds with itself, each part pulling the work into two separate directions. The work offers a glimpse into an in utero place between the abstract and the figurative, an active space, where the subject is unfixed, vague and suggestive. Mawinzhe is a visualization of what it must feel like to be in the state of becoming, on your way to something else. It presents an unfamiliar form as it’s subject is caught in an act of disappearance; it is an awakening. In the end, the whole of Mawinzhe plays out like an apparition and conjures fellow painters who made with similar off-kilter vision: Bacon, de Kooning, Lassnig, and Dunham, all artists who set scenes and began open-ended wild narratives on canvas, odd, and sometimes dark.

Brooklyn-based Gomez began his career by showing abstractions, but buzzing in the background of his painting practice was what he considered the more personal practice of figuration. He was reluctant at first to show these works, considering them too private for public view. However, the work didn’t stay in the background for long. When a curator selected some of these works for a show, the important relationship between the two seemingly separate creative spaces he occupied came forward in the public representation of his work. Gomez considers both abstraction and figurative work as two critical components to his making. “Having a balance between the two has been my focus. One is just as important as the other. Sometimes figuration allows me to study people’s behavior and mannerisms: there I find a narrative element that interests me,” the artist declares on his website. In Mawinzhe, Gomez has found a space where his interests, abstraction and figuration, coexist with compelling results.