We wouldn’t expect a straight take on the presumed comfort of “home and hearth” from Marlene McCarty. Her monumental diptych, Hearth 2 (China Camp 2009, China Camp 1976) (2010) is no exception. The two drawings (80” x 117” and 80” x 115”) describe the scene of a crime, in stereo. Both show the same low-angle view of scruffy eucalyptus woodlands in California’s China Camp State park, located just north of San Francisco. Through dry blades of grass, we see the lip of a large, round object in a clearing in the middle ground of the scene. It is solid and concrete, alone against a dappled background of weedy trees. All is rendered in graphite on paper. 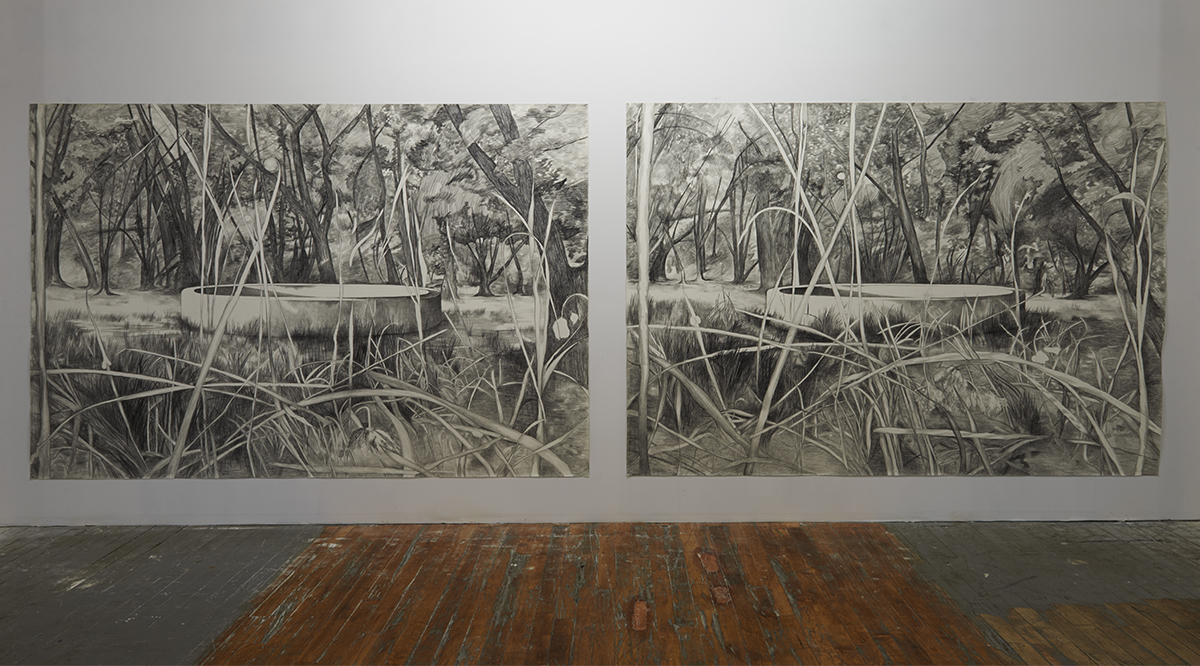 The scale of the drawings’ central object is strange in the context of the rest of the landscape, too big to be a campfire pit, the “hearth” of the work’s title, too broad and low to be a well. Panning back and forth between the two drawings reveals minor differences, accounting for the fact that each shows a distinct moment in time: one witnessed by the artist, one alive in her imagination. McCarty visited the China Camp site in 2009 to photograph the scene where, in 1976, 16-year-old Marlene Olive and her 19-year-old boyfriend Chuck Riley had burned the bodies of Olive’s murdered adoptive parents over an old livestock cistern—the repurposed “hearth” depicted here.

Viewed from afar, McCarty’s mural-sized drawings have an eerie smoothness. Objects and bodies take on the finish of eggshells, interrupted by snaking tendrils of hair or grass. This texture results from the labor of a relatively tiny marking instrument (pencil or ballpoint pen) on a large expanse of paper. We are used to seeing big paintings, but minus the liquid luxury of the “broad stroke,” we witness full evidence of the relationship between body, marking tool and marked surface. McCarty’s drawings record her hand’s range of motion, the way she inflicts or grooms marks into the paper. In this sense, her work is a record of the time spent between artist, tool, and substrate.

In an earlier work titled Hearth (1992) McCarty laid out matchbooks on the gallery floor in the shape of a fire ring. Each matchbook had a pinup girl on the outside and was printed with the words, “I got a clit so big / I don’t need a dick” on the inside. Hearth 2’s reference to the violent thing that took place at the site is less direct than either its namesake or the Murder Girls McCarty drew in work from the early 2000s. Hearth 2 makes reference to Marlene Olive, a recurring figure in McCarty’s work, but shows the landscape where her crime took place instead of her smooth yet uncomfortably bared teenage body.

We can assume that little has changed at the China Camp fire pit in the 33 years between 1976 and 2009. Likewise, accounts of Marlene Olive on websites like krazykillers.wordpress, crimelibrary.com, and in Marin Magazine eagerly engage in the sexualized myth of the teenaged girl gone wild, a cautionary story of what happens when women break the rules and inevitably get caught. If McCarty’s past works have placed the viewer in the position of the voyeur (a forcefully uncomfortable version of such), then where does Hearth 2 place her? Perhaps at the dual vantage of the artist and the killer, looking back and forth, simultaneously.