At the close of Andrei Tarkovsky’s film Nostalghia, the exiled poet Andrei finds himself in the ruins of the San Galgano cathedral, confronted with the memory of a home that is forever out of reach. The cathedral’s interior and exterior have become blurred, the roof long since collapsed, the delineation of sacred space rendered in remnants, a residual geometry, more than the presence of ritual. 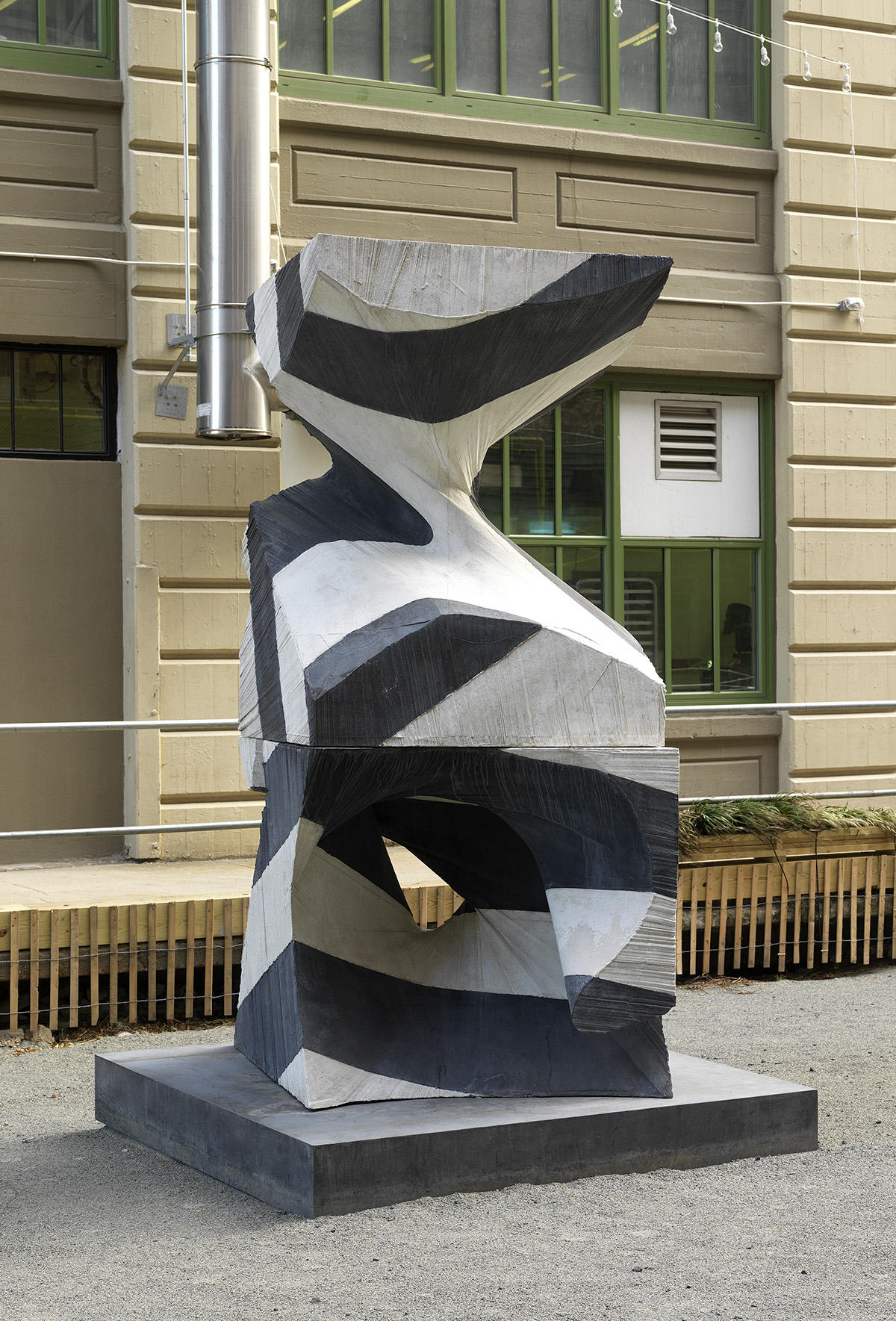 The courtyard at Industry City frames a similar shift in function over time, albeit one more urban, industrial, immediate. It is at this juncture that I first encountered Mel Kendrick’s work. His sculpture, Marker, speaks to both territories. Made using alternating layers of black and white pigmented concrete and industrial casting techniques, its palette was inspired by the striated marble interior of the Cathedral of Siena, only a few miles west of the dilapidated abbey in Tarkovsky’s film.

Kendrick’s description of making the Markers is deceptively simple:

There is a timeline in the sculpture, there is a series of maneuvers, a process to their making that involves the removing of the inside, breaking it down in many parts, and reconstructing the two pieces, and then in this case with the concrete, I went a step further in using the reconstructed parts as the molds, so they were birthed again, and the negative becomes positive, so I feel that there is always a progression, a history within the pieces, where it came from, where it might go. Of course, it’s frozen now, but that’s a part of the information too. It’s an object, but it’s also a point on a timeline.

The block remains whole, if no longer solid, and a sculpture emerges from this excision that, once recast, both obliterates and enshrines its origin: moving from foam, to cavity, to sediment, to solid. What was full was then emptied, and filled again, not unlike the early 20th-century warehouse buildings that framed it.

Like the abbey divested of religion, the industrial origin inscribed in the buildings has receded into a titular presence. In the weeks between their dereliction and commercial redevelopment, the floors and courtyard occupied by the exhibition provided a glimpse of a community that is usually so fragmented as to be relegated to conjecture: artists joined through collective experience and proximity rather than epoch or aesthetic.

For Kendrick, that singularity came to be a defining highlight of the show:

I thought it was one of the best shows of the year. I really liked the idea that everybody was affected in their own way, or not affected and just wanted to show support, but everybody was supporting each other. I saw incredible things by artists I’d never heard of, and had a chance to see a lot of work in depth. It was a great feeling of support and camaraderie that is rare in the art world, because the only other big shows we have like that are art fairs, that are totally commercial, and part of the aspect of this was that it was not the least bit commercial.
Topics
Community, Courtyard, Industrial, Sculpture