The billboard-sized words “We the People” grow out of and drip from the wall in the outline of calligraphic script. Before comprehending the phrase, those of us who live in the United States or are familiar with its culture have already registered layers of meaning and their signifying objects: wigs and waistcoats, quill pens, yellowed parchment. These are the familiar first words of the preamble to the Constitution, but they are growing, dripping, being rubbed out. 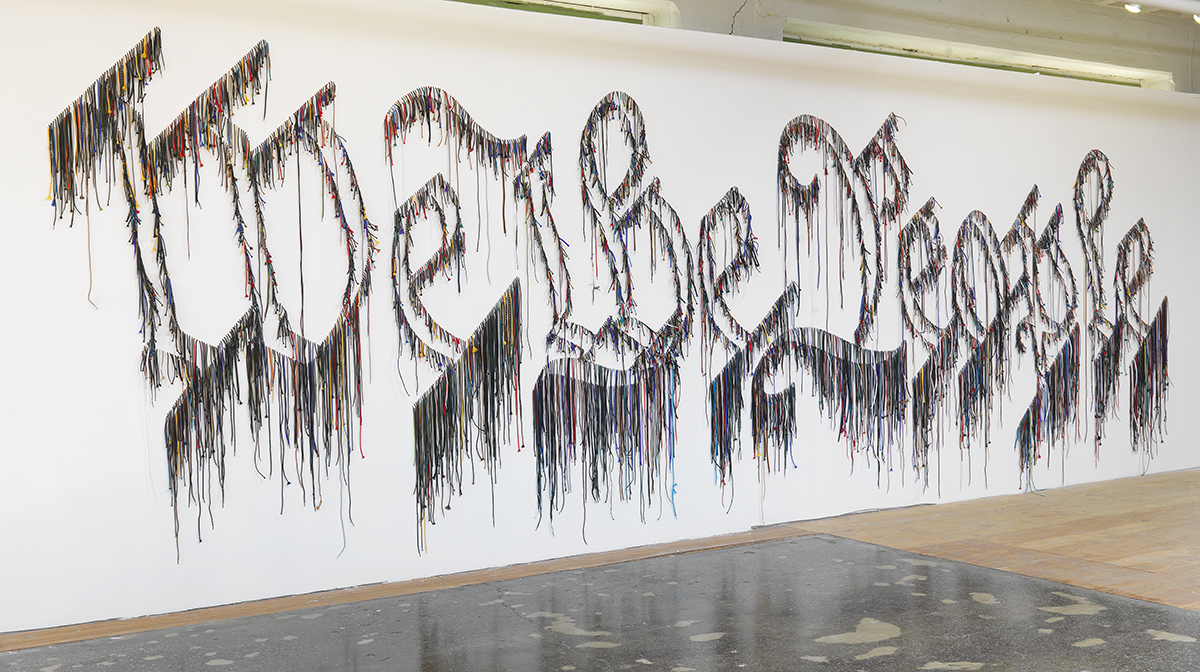 Nari Ward, “We the People,” 2011. Shoelaces, dimensions variable. Courtesy of the artist and Lehmann Maupin Gallery. Photo by Brian Buckley.

This is Nari Ward’s installation We the People (2011) made in collaboration with The Fabric Workshop and Museum in Philadelphia. Hand-dyed, found shoelaces are planted in the wall, their natural lengths (broken, whole, sometimes knotted) hang from each pore that forms this familiar phrase. The result is uncanny, as if we’re living on the reverse side of a giant embroidery hoop, all the loose threads exposed. The shining, decorative side must show on the other side of the wall, but then it would read backwards.

In keeping with Ward’s practice, this is trash made important, rigorously employed to new purposes while retaining it’s recognizable form. What if every old shoelace was used to rewrite the U.S. Constitution? Would that make shoelaces too valuable to throw away or lose? Could one tiny shift in the culture of shoelace usage change our society? These are the questions that surface while contemplating Ward’s work: those that move from mundane to existential, from the dreamscape to the newspaper headline.

There’s something frightening about Blue Rung (2008). Materials are listed as wooden ladder, metal gate, shoe tips, plastic, bug-zapper and blue pigment. The viewer can make out the items on the list, but their familiarity has been translated through the occult. Deep blue pigment echoes with the fluorescent blue of the bug-zapping bulb, a beacon from across the gallery floor. It’s embedded halfway up a mean and crusted cage made from the type of metal gate used to close old-fashioned elevators. Perhaps Blue Rung is a ruin still glowing, or perhaps it’s a ceremonial object, a cage one could stand in to get transported to another dimension, an elevator to the spirit world.

Ward’s objects send the imagination to many different places. He can be seen as a surrealist as much as a conceptual artist in that assemblages remix the familiar to reveal its latent meanings. Ward’s objects are political because they are made from the refuse of our time and place. These materials are our trash, produced by and for (and discarded by) the people who are governed under current interpretations of the U.S. Constitution. And yet why are these objects trash when they have been given new life as art? What are the criteria for anything to be discarded or disused, whether human or object? Under what conditions can redemption occur?