The Trees Form the Forest

Works by New York/Alaska-based Sienna Shields, and C. Finley of New York and Rome, are rich with texture and color. Chock-full of compiled items, Shields’s collage paintings and Finley’s mixed media mandala are comprised of layered materials that cohere together to produce whole works. These artworks are neither overwhelming nor disorganized—rather they are visually diverse, and create movement and energy through the complex placement of acrylic-splattered paper pieces and junk jewelry respectively. Both are members of HowDoYouSayYamInAfrican?—a transnational artist collective formally established in 2013. 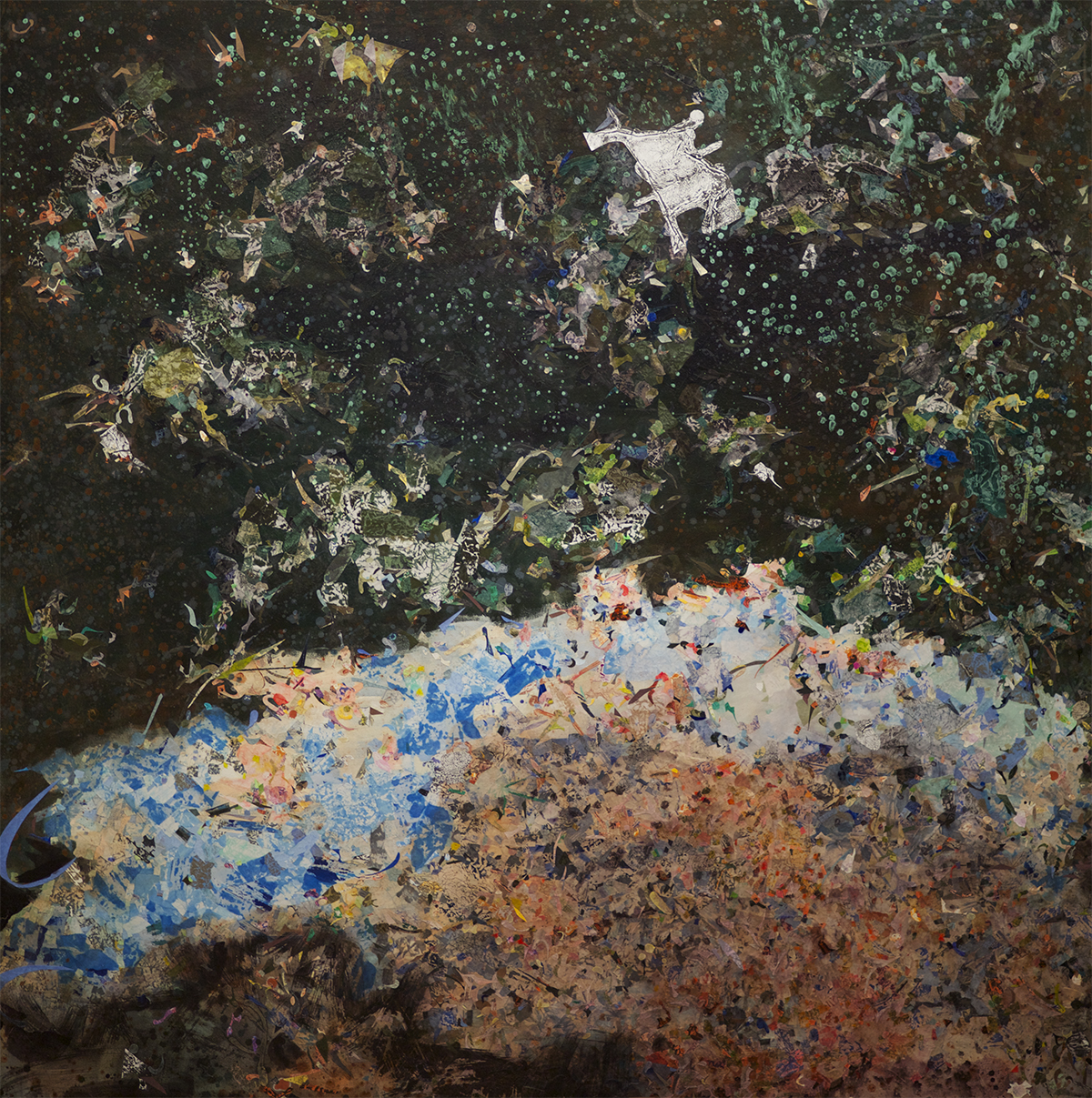 With Finley’s degree in journalism from the University of Missouri, and Shields’s in Caribbean and Latin American History from Lewis and Clark College, both artists’ educations began outside of the fine arts. However, Finley went on to receive a BFA in Painting and an MFA in Sculpture/Intermedia, and Shields learned her craft by working in a wide range of styles and materials since her childhood.

The patchwork narratives of quilting, and the dense networks of her beaded systems are very apparent in Shields’s 2013 collage paintings. Every overlapping paper selection has a direct impact on the effect of the final work despite their generally unplanned arrangement. Shields told American Craft Magazine that when she is working on one of her collage paintings she “goes into this other time and space with [her] hands and brain.” 1 By eschewing elaborate planning, Shields gives up some of her authorial power, even saying “I don’t have a lot of control over it,” 2 and this establishes a rhythm and sense of growth in her compositions.

Untitled 51 and Untitled 37 (2013), the two works Shields showed in Surviving Sandy, are both large in scale at almost seven feet tall, and equally as wide. Hung across from one another, they act like distorted mirror images. The color palette of both ranges from a concentrated dark blue, to a more sporadically used vibrant pink. The forms scattered across the canvases create loosely-packed color blocks that intimate a hazy aerial view of some unknown topography. Holding reminders of the imperfect layering and rewriting techniques common to hand-drawn cartography, Shields’s collage paintings have the potential to inspire an infinite amount of narratives and associations. While Shields’s paintings are not truly representational, there remains a pull to locate places, people, and things like finding meaning in the forms of Rorschach ink blots. 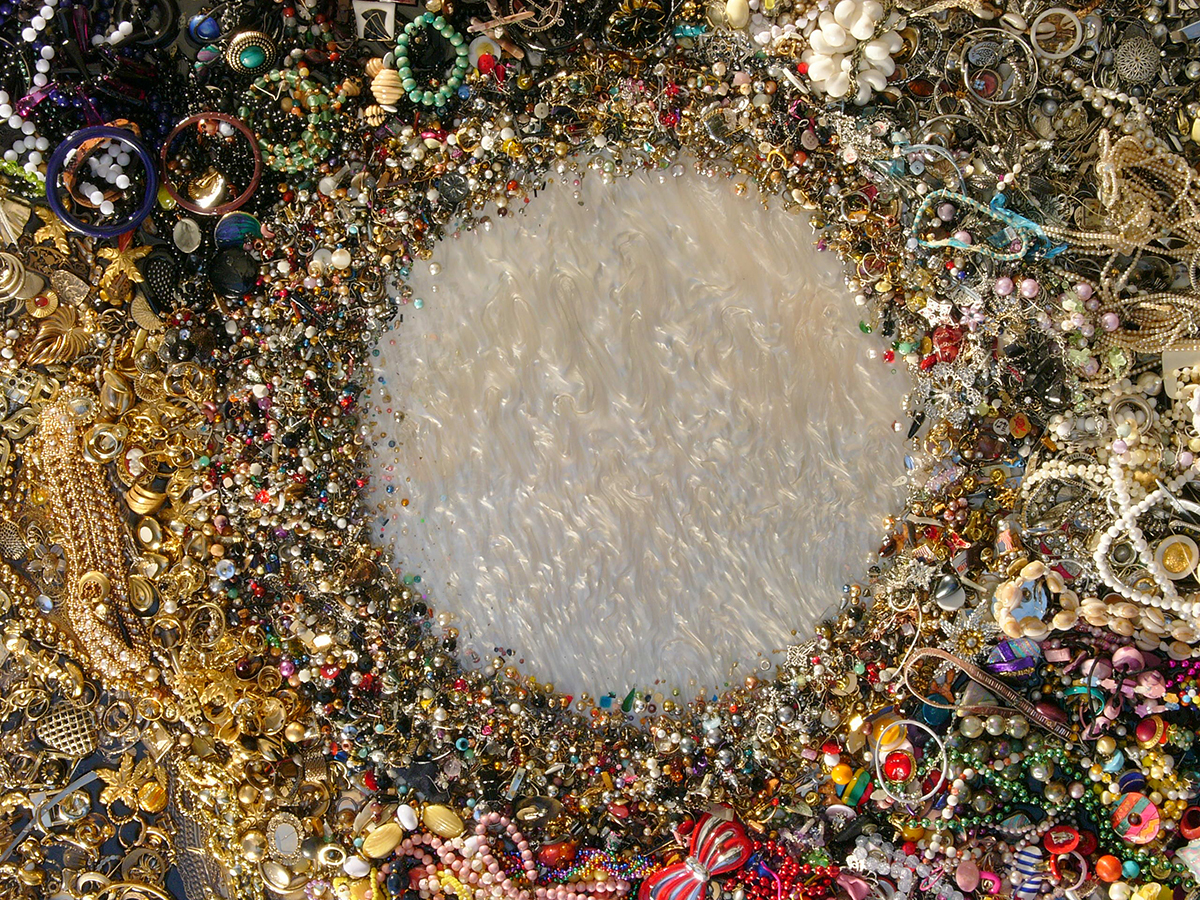 Bracketed by Shields’s work, Finley’s Quatro Stagione Mandala 2017 (from the future) (2013) is six feet in diameter and unapologetically kitschy. To translate; the Four Seasons Mandala combines Finley’s interest in the Greek Myth of Persephone and the four seasons with the standard decorative tools of feminization and beautification: jewelry. By using junk jewelry ordered in bulk online, rather than collecting pieces of true monetary or historical value, Finley emphasizes the superficial qualities of feminine beauty in order to discuss what lies beneath. As she says: “By manipulating objects that are associated with the feminine and the precious I interrogate the process by which objects are gendered and valued.” 3 This concept is further explored in her other projects, including the colorful wallpapering of decrepit dumpsters and trashcans into outwardly trendy receptacles.

Despite the almost haphazard way in which the junk jewelry appears to be applied to the mandala’s surface, with some beaded strands dangling precariously from one section over into another, Finley spent considerable time methodically sorting through the pounds of jewelry that she purchased for the work. 4 Miniscule bits of jewelry encircle the central moon shape and separate it from the four seasonal sections. Originally meant to be hung from the ceiling, Mandala is now hung upright on a wall in order to “allow viewers to fully appreciate the details and see its many pieces up close.” 5 It can also be rotated in order to change the seasonal orientation. More than anything else, Mandala is a work that defies the concept of physical beauty but accepts time, and accordingly adapts and changes as it grows older.

Using a mandala, an infinite and holy image, provides a visualization of unending, cyclical time. Although in Surviving Sandy the title of the work included the year 2017, this changed with time to 2018, as it is always to be dated four years in the future. The story of Persephone, and consequently the creation of the four seasons, likewise begins with physical beauty as a commodity and creates a notable passage of time as a byproduct. Fair Persephone is kidnapped by Hades to be kept by his side in the underworld, and in response Persephone’s distraught mother, Demeter, sucks the life and beauty from the world in the first winter. In a compromise, Hades and Demeter each spend half a year with Persephone, instigating the natural cycle of the Earth.

Both artists accrue open-ended imagery and symbols from the unconscious patterns that inevitably come from their processes.

Although Mandala deals with the fragile constructs of commodified beauty and time itself, Shields’s paintings could as easily be maps of the cosmos as of the Earth. Leaving realistic representation behind them, both artists accrue open-ended imagery and symbols from the unconscious patterns that inevitably come from their processes. Jewelry and paper strips are never pushed to blend into a representation, rather infinite images are available due to the spatial relationships within each of the disparate systems.