Tamara Gonzales is like a shaman, a female spiritual leader in North Brooklyn. With the most economic means, her ecstatic paintings effuse with kaleidoscopic patterns of color and light. She employs antique lace as a template through which she creates polychromatic washes of spray paint. Lace isn’t girly in Gonzales’s images. Multiple patterns and styles are collaged together in clashing arrangements of vibrant hues stained onto a white ground. 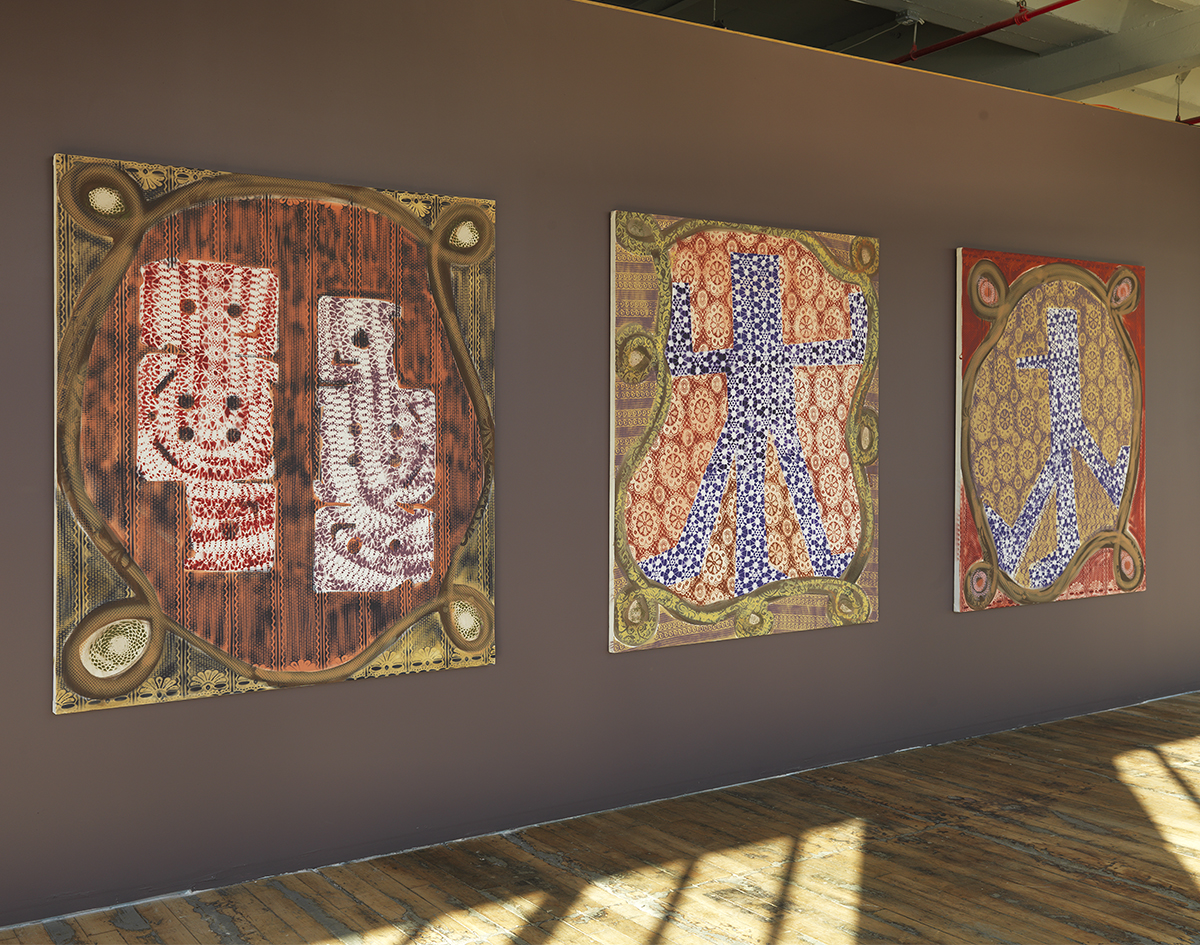 The lengths of the delicately patterned fabric become stiff and heavy with paint, and lay in tall stacks on wide tables in Gonzales’s studio. Favorites are used multiple times throughout bodies of work, and garner a studio history of their own as the paint cakes into their tiny holes and crevices.

Pseudo-figurative totems appear and reappear in spectrums of variegated color, stacked together in multiples, or stand isolated in an ocean of dappled light. Gonzales has created a lexicon of stencils, which she has cut by hand from cardboard. They are used and reused throughout bodies of work, operating like beloved characters in an extended non-narrative story. They are not exactly figurative, but neither are they wholly abstract.

These stencils become icons of power and energy, and taken as a body, Gonzales’s oeuvre creates a complex iconography through the repeated characters. The dancing man—who has three legs, perhaps connoting movement, a nose, and sometimes a phallus—is encased within the painting itself, pushing against its edges, or is framed in a cave-like womb, which borders the painting. The “little guy,” with two eyes peers out blankly, like a gnome. Never, however, do they overtly reference any specific religious, tribal, or spiritual symbols. Neither are they entirely serious: some are adorable, others comical, still others, terrifying.

These stencils become icons of power and energy, and taken as a body, Gonzales’s oeuvre creates a complex iconography through the repeated characters.

Gonzales’s work is deeply informed by independent international travel. She has lived and worked abroad extensively in India, Peru, and Mexico, and her imagery draws deeply on mythological histories from these first-hand experiences. She has a particular spiritual affinity with Durga, the supreme Hindu mother goddess, depicted astride a tiger, simultaneously stabbing a demon with a scimitar, and stamping upon ignorance. Gonzales’s artist lectures include images from her trip to Calcutta for Durga Puja, one of the most important spiritual festivals in India, where provisional temples of cloth are erected throughout the city to house hundreds of enormous hand-made sculptures depicting Durga, her enemies, and her entourage.

Gonzales’s work develops in explosive spurts of productivity. They are made rapidly in quick succession, lending to all her canvases a feeling of incredible freshness. Gonzales returns from her annual retreat to upstate New York with upwards of 30 large format canvases. The images explode from her production in every conceivable direction in both subject matter and style. Oftentimes, the lace patterns and prismatic colors stray from her canvases to cover entire walls as backdrops of brilliant yellow, mottled blue and vermilion in her solo exhibitions.

Her colors aren’t neon, they’re Manic Panic. Her paintings aren’t pretty, they’re punk rock. Her imagery is not fictional; it’s more like the Rasta-colored tribal knife tattooed on her forearm. For her January 2013 solo exhibition at Shoot the Lobster in New York, Gonzales made a ten-foot-tall neon line drawing of a fist with pinky and index finger extended. Rock on.