The world is too much with us; late and soon,
Getting and spending, we lay waste our powers;
Little we see in Nature that is ours;
We have given our hearts away, a sordid boon!

—William Wordsworth, The world is too much with us

No time to turn at Beauty’s glance,
And watch her feet, how they can dance:
No time to wait till her mouth can
Enrich that smile her eyes began?
A poor life this if, full of care,
We have no time to stand and stare.

They evoke poetry, these stoic trees with their impermanent permanence. Changing hues with changing weather; the trunks now copper, now ashen, the leaves turning green, then gold … then gone with the whispering winds. Time is both their master and their slave; it can strip them naked or adorn them with jewels, but is unable to budge their ancient roots an inch without the consent of the elements. The blueness of the heavens is sometimes more yellow than grey. The greenness of the earth, patched with sunny clearings amidst long shadows, changes from warm to cool with changes in the sky. But the trees stand as they have stood for hundreds of years in the gardens of the Villa Doria Pamphili, silently offering refuge to anyone who seeks shelter under their boughs. 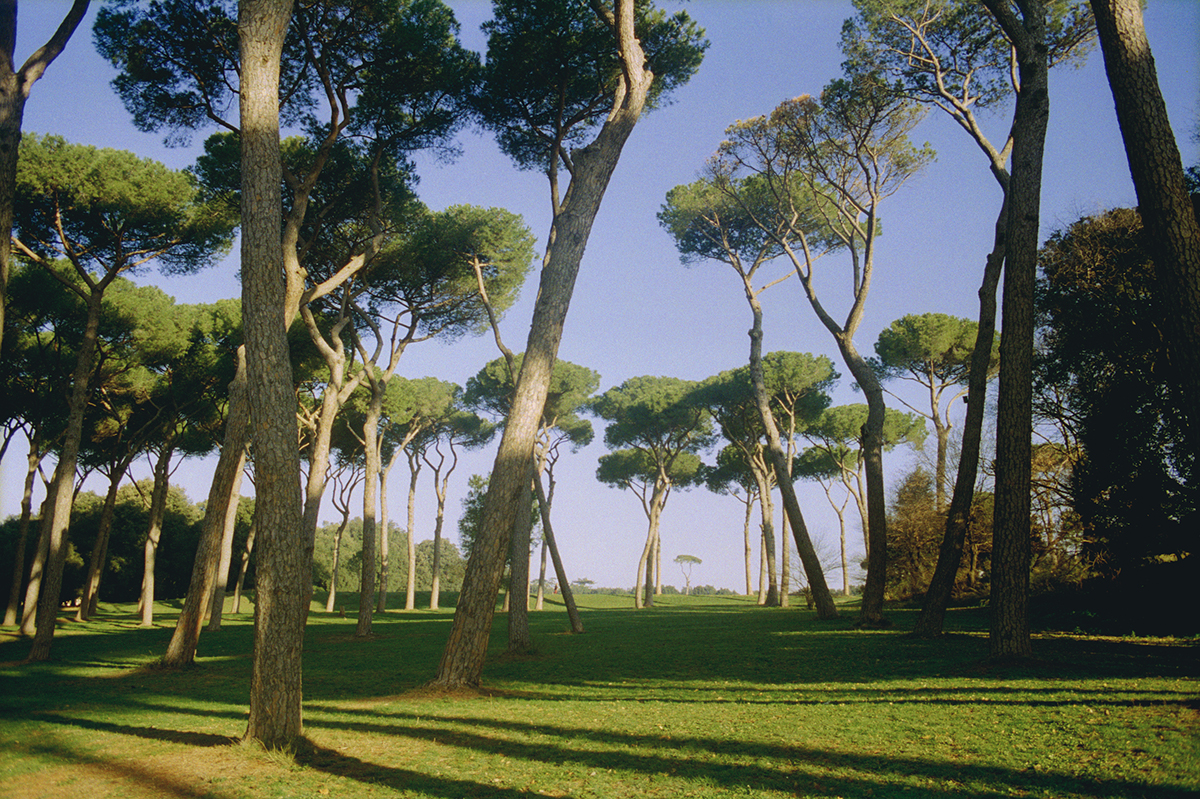 The Villa itself has been through much over the years, from its 17th-century construction to the architectural extensions over the years. A battle or two were fought in its lap before it became what it is today; the largest landscaped public park in Italy, comparable in scale and circulation of people to New York City’s own Central Park. Yet Bittencourt’s images capture a kind of romance that seems somewhat ethereal, as if the trees exist in their own time, in their own world, outside of human encroachment or influence. The artist depicts a sense of isolation without making it seem like a moment of loneliness, almost as if she feels herself to be one with the trees—almost as if she ages with them instead of with humankind. Each image portrays a private moment of recognition between her and the landscape, undisturbed by the presence of the outside world.

When the Doria Pamphili series was first exhibited in 2004, the images were accompanied by the writings of the artist’s husband, Vincent Katz. Next to the framed photographs hanging on the walls of Bruno Marina Gallery, Katz put into words his love for his wife and children, thereby linking this love irrevocably with the images of Bittencourt’s trees: “I have been happy to look at these trees so long […] THAT was how my wife found me loved and loves and THAT was what I wanted for all my life. What I’d give, love, for my sons and her.” There is a moment of recognition in Katz’s words, an indication of a kind of oneness with the trees which seems to echo the sentiments evoked by Bittencourt’s work. In examining this creative harmony between Bittencourt and Katz, I find myself remembering the words of Margaret Cavendish, a poet, coincidentally from the 17th century, who wrote about her relationship with her husband and their work:

A poet I am neither born, nor bred,
But to a witty poet married:
Whose brain is fresh, and pleasant, as the spring,
Where fancies grow, and where the Muses sing.
There oft I lean my head, and list’ning hark,
To hear his words, and all his fancies mark;
And from that garden flowers of fancies take,
Whereof a posy up in verse I make.
Thus I, that have no garden of mine own,
There gather flowers that are newly blown.

Cavendish’s words become a kind of testimony to the evident bond between Bittencourt’s images and Katz’s words, but while looking at the lush trees in the photographs, more suggestive is the way in which the poet compares her husband’s fertile imagination to the generosity of nature and its ability to inspire each person in a unique way. Just as her husband’s thoughts become the poet’s garden and his words the flowers she uses to create her own inimitable bouquet, so do Bittencourt’s gorgeous photographs—so powerful in their ability to move Katz to create his own tender images—offer fertile ground for anyone who, as Davies once wrote, takes the time to “stand and stare” at nature’s infinite variety, and in doing so discovers one’s own poetic turn.