Will Yackulic’s Enigma Variations takes its name and theme from a work of music by Edward Elgar written in 1898-1899. Elgar’s composition of twelve variations on a theme is composed to suggest the personality of a friend, personifying some quirk of character through the texture of music. Similarly, Yackulic’s 24 ceramic vessels—each approximately five inches in height—are portraits of friends constructed in a visual language specific to each person. Reminiscent of Lego constructions, smoke stacks, or converging sets of unnavigable stairs, on closer inspection they turn out to be none of these things; they are in fact abstractions, in spite of their geometric shape. I sat down with Will Yackulic in his shady backyard in Brooklyn to talk about how Enigma Variations came into being—each peculiar, individual object and the whole that they comprise—and their simple, enigmatic appeal. 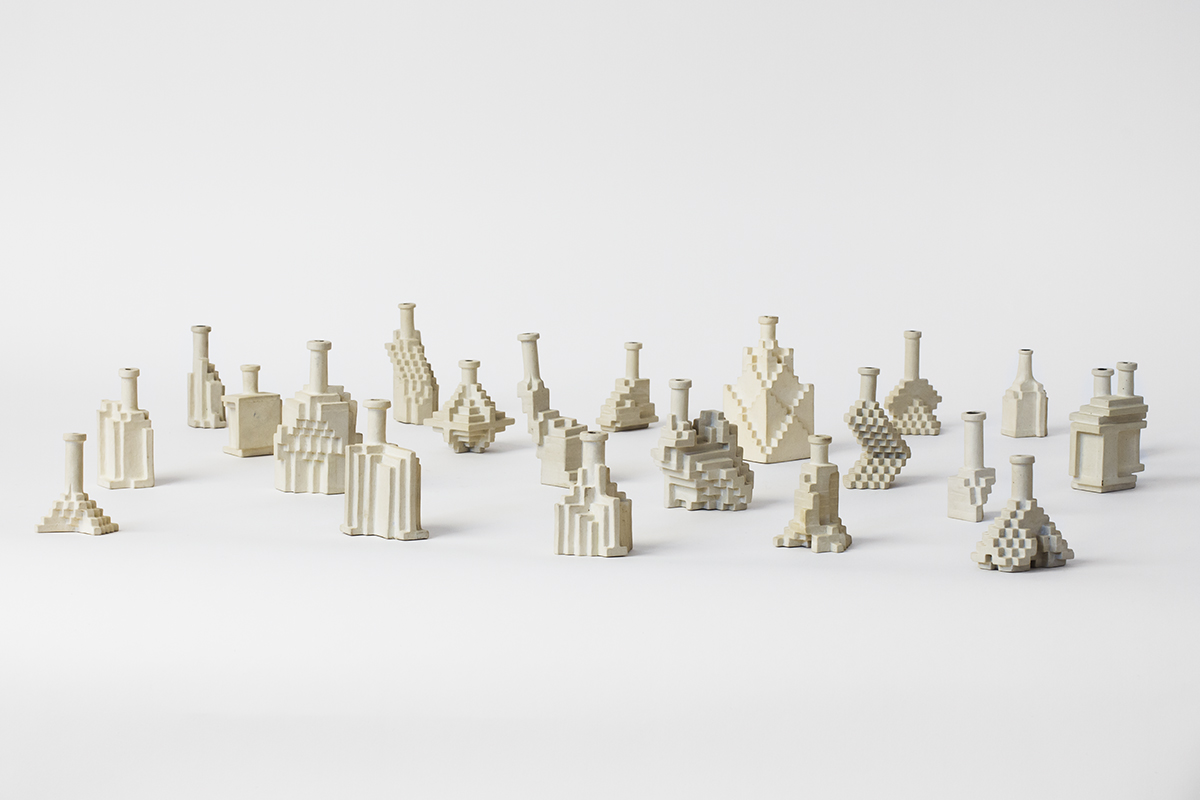 Juliet Helmke: How did you get involved with Surviving Sandy?

Will Yackulic: My good friend Dan Turner told me about it. He got involved early on in the project because he was hugely affected by the storm. His whole studio flooded, three or four feet up. We were talking about the lingering effects of it and I told him how much of my work stored at Jeff Bailey Gallery was destroyed, and so he put me in touch with Phong and the team that was working on putting the exhibition together.

Helmke: Were you working on Enigma Variations at the time of Sandy or was it finished before?

Yackulic: I started it a little bit after Sandy and it was finished before the exhibition. I sometimes refer to the components that make up this piece as reliquaries, because they are receptacles for memories of my friends. I mean, they are portraits.

Helmke: This work really struck a chord with people who came to the show. For starters the presentation of it within the gallery was really exceptional. I remember walking along and being drawn to it. When you get closer to the piece it becomes a very intimate experience. You’re looking down on these objects and initially you get the sense that they are recognizable. You think they are chimney stacks or the tops of buildings, but you quickly become aware that, although there’s a resemblance, that’s not exactly what they are. Can you talk a little about the structure of the work, because this type of building-block aesthetic is something that has been present in your work before, in earlier drawings, collages, and landscapes paintings.

Yackulic: Well first of all, when I was a kid we lived on the tenth floor of a building in New York and I remember very vividly looking out the window and seeing the tops of buildings over on the west side, and I remember playing with blocks underneath my mother’s piano. And something about my mother playing music while I played with blocks allowed for this intuitive way of putting things together which, on the one hand is organic, and on the other, structured. My work consists of a see-saw or bouncing between these two impulses. There is definitely a theme running through my work that involves pattern recognition—a way of making sense of phenomena. And there’s a further aspect of that to this work because I was making portraits of friends and finding ways of reflecting aspects of their personality in sculptural forms. I was trying to personify not only them, but what they meant to me, in this other, made-up visual language.

Helmke: Tell me more about making them. How did they come about?

Yackulic: Well I’ve been aware for a little over a year and half that my wife was most likely going to get a job outside of New York. We’ve been living here for 10 years and we’ve really built a community. Knowing that I was going to leave made me want to make portraits of my friends. At the start I wanted to make actual paintings. I was going back to school last year for psychology, just taking some classes, and I was feeling a little removed from the art world. I was taking some time off, but I wanted to keep my hand active and so I started to paint these portraits of people. At the same time I was painting still lifes and I wanted to take a pottery class to make some still life objects to paint from. My friend Paul Wackers suggested I go to this pottery place in Williamsburg, Choplet, and then very quickly I made a little maquette of something that related to work I was making about ten years prior—the gouache landscapes you mentioned before. And I made that and was thinking about how it was like a container, and thinking about these portraits I was making. And so it happened very intuitively and because they were hollow I figured I could have people put something inside, a keepsake of the person, allowing them to complete it, much like the Duchamp piece With Hidden Noise, where he had Walter Arensberg place an object in a ball of twine sandwiched between two metal plates. Only Arensberg knew what the object was. I wanted to continue that. So the way that my friends put things into their vessel was blind. The object was hidden inside a box with a small aperture through which they deposited their token and then I took the vessel back and sealed it.

I figured I could have people put something inside, a keepsake of the person, allowing them to complete it, much like the Duchamp piece With Hidden Noise, where he had Walter Arensberg place an object in a ball of twine sandwiched between two metal plates. Only Arensberg knew what the object was. I wanted to continue that.

Helmke: So they know what they put in, and you don’t, but they also don’t know which piece corresponds to them.

Yackulic: Exactly. The identity of the person matched to the object is known only to me. It wasn’t intentional when making the piece, but I like that it’s obvious that they belong as a community though they are individual forms.

Helmke: And what about your individual experience of Sandy?

Yackulic: I was here, we’re not in the flood area, so for me it was just a lot of rain for a few days. But then quickly we started to realize how serious it was, especially when I got into Manhattan to help Jeff Bailey Gallery. They were quite affected as they are less than a block from the water. The whole basement had completely flooded. All their storage was in there. Before I went in I remembered some of my work was there but I wasn’t too cut up about it. Once a piece is done, it’s done. In some ways having them destroyed is cathartic. I was pretty philosophical. But then there was one piece of mine that I saw which I had spent a good deal of time on—and seeing it destroyed was rough. I had a moment where I felt pretty sad, but it didn’t last long. I went back to feeling okay. The whole thing was slightly humorous too because I discovered a series of stain paintings I had done and they were re-stained by the flood water, transforming them into something unexpected and new.